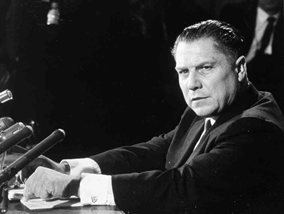 As a criminal defense lawyer, I am fascinated about the 38-year-old mystery surrounding Jimmy Hoffa’s disappearance in 1975 and the ongoing search for his remains.

It is all but presumptive that Hoffa’s disappearance was on orders of the Mafia. This contention is based upon the notion that Hoffa, desperate to get back into Teamster politics and relevance, was prepared to blackmail Mafia operatives.

I have never been entirely satisfied with this theory.  For one thing, Hoffa had been in prison and was effectively banned from Teamster activity.  Moreover, the Teamsters had moved on to a more corporate identity and wanted to shed its larger than life Hoffa persona.  Mafia help or not, the Teamsters by the mid ‘70’s were done with Hoffa.  A more likely but banal theory is that Hoffa himself got into debt with the Mafia and was either unwilling or unable to pay back.  Like the Teamsters, the Mafia was done with Hoffa too.

The pressing urgency in tracking down the body is no doubt due to the fact that anyone with particularized knowledge on the subject is very old and if a successful discovery of Hofffa is not made soon, the secret will remain so for the ages.

The current “tipster” of the moment is the son of gang boss Joseph Zerilli who once allegedly controlled Detroit.  Now, he’s not talking on account of the fact that he died in 1977 of natural causes. But his son, Tony Zerilli a spry 85 year old claims that Hoffa was buried in a vacant field in a suburb of Detroit.  Interestingly, Tony can only base his contention on heresy.  Tony was incarcerated in 1975.  But, credibility notwithstanding, the FBI is prepared to dig.

This will not be the first time that the Federal Government has taken serious representations regarding Hoffa’s whereabouts. Once before, on a farm in Milford, Michigan, efforts to uncover Hoffa’s final resting place resulted in a failure.

What makes Jimmy Hoffa such a curious individual is the duality that in my view defined his life.  On the one hand, his desire to create a union for truckers was truly born from an altruistic desire to enhance the quality of their lives.  But, in terms of how he would get there was through the active engagement, cooperation and entanglement of acknowledged gangsters.

Hoffa, ultimately is a tragic hero, himself the victim to the philosophy of consequentialism, that is, “The end does not justify the means”.