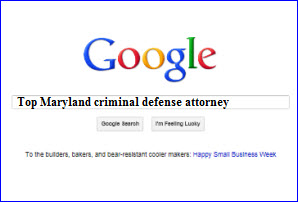 A frequent internet search involves individuals typing into the Google browser the following: “Top Maryland criminal defense attorney”.  But what exactly are we seeking?  The truth is most people have no idea what qualities make for a good lawyer and they are hoping that by making this type of inquiry, someone else, perhaps with greater knowledge and experience will have done the homework and created a ready list of the best attorneys in town. The purpose of this blog is to identify what qualities an individual should be looking for when hiring a criminal defense attorney.

While there are many factors that make for a good lawyer, in broad brush strokes, there are only 3 items that need to be addressed.  I will explore each of the three in detail.  When meeting with an attorney, keep these 3 in mind:

Often people think, “I want a smart lawyer!”  That’s easy and therefore largely meaningless.  In order to be a lawyer, a person somehow managed to obtain a college degree, score well on the Law School Aptitude Test (LSAT) and graduate from an accredited law school.  The final hurdle, and the most challenging was that he had to pass a state bar exam.  If a person can do all that, he or she is smart, or at least, smart enough.  So intelligence, as a distinguishing factor, does little to differentiate one lawyer from another.

But some lawyers are lazy.  They rely on their acquired skill set but otherwise shoot from the hip.  The first analysis of a case is their only analysis of the case.  If their one strategy falters, they and their client are done.  The difference being the lawyer gets to leave the courtroom the same way as he came in; often the client, not so much.

So, with this in mind, let’s explore the first item.  A lawyer must be willing to work hard. 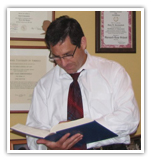 Hard working lawyers follow certain rules:  They listen to their clients and do not interrupt.  They take notes, but not obsessively.  Hard working lawyers don’t brag about past exploits.  Hard working lawyers do not need to self-aggrandize. It doesn’t matter how many times a lawyer has handled a particular case, he always examines and reads the relevant statutes and case law. After all, law is not static.  Things are ever changing – sometimes for the good and often for the bad.  A good lawyer strives to keep up.  Therefore, a top criminal lawyer worth his salt is always engaged with his bar association and attending as well as conducting legal seminars.

A frequent question that I am asked is how can I represent a person I know to be guilty.  The truth is my opinion is irrelevant.  I cannot care.  A legitimate justice system depends not on the prosecutor.  Nancy Grace apparently was a prosecutor.  And to some extent, it depends less on the court.  A system of justice that is truly honest and legitimate relies upon the integrity, idealism and effectiveness of its defense attorneys.

Recall the classic novel we all read in school: Harper Lee’s To Kill A Mockingbird. When Atticus Finch accepted the representation of “Tom”, a black man accused of raping a young white girl, he had no idea whether Tom and committed the rape. He didn’t even consider the issue.  He responds to his daughter when she asks, “your defendin’ him, then why are you doin’ it?” Atticus explains, “For a number of reasons the main one is, if I didn’t I couldn’t hold up my head in town, I couldn’t represent this county in the legislature, I couldn’t even tell you or Jem not to do something again.”

Consider countries like China.  Does anyone really believe that a criminal conviction from a Chinese court is truly legitimate?  After the Iranian Revolution, trials were conducted at midnight.  Executions followed at dawn and notices of the condemned were posted in the morning.  The accused had no lawyer.  The tribunals were intended to terrorize and immobilize the people.  It worked.  In the absence of zealous and passionate criminal defense lawyers, our democracy would quickly devolve into tyranny.

And now, the third item; luck.  Nothing sets fear in the hearts and souls of clients as when I say, “we will be looking for some luck along the way”.  By nature, I am no gambler.  I subscribe to the rule of tireless inquiry, hard work and being conscientious.  I do not expect manna from heaven.  There are few shortcuts in defense. However I’ll take a good break in a case whenever I find one.

The ancient Roman statesman and philosopher Lucius Annaeus Seneca wrote, “Luck is what happens when preparation meets opportunity”.  A defense attorney is always looking at the government’s case in terms of its frailties.

The best criminal defense attorneys are masters of the Rules of Evidence and criminal procedure.  The government is obligated to establish each and every element of a crime.  Failure to do so is fatal to the prosecution.  A good practice tip is that whenever a prosecutor uses the term “totality of the evidence”, either in their closing or in trying to survive a motion to suppress, it is a ringing endorsement that one or more elements was not satisfied.

In many cases, there are opportunities that are only exposed after careful and tedious investigation.  Perhaps they may initially appear as something relatively minor, but recognition and exploitation of these opportunities can generate huge benefits that lead to acquittal for your client.

And now an example taken from case files of the Law Offices of Gary H. Gerstenfield:

An Allegation of Child Sex Abuse

“George” was accused by a neighbor of molesting her 4-year daughter.  I found the accusation curious as George worked during the week in construction.  He left very early in the morning and returned late in the evening.  His wife who baby-sat the child was the sole caretaker.  I also observed that George and his wife had 3 children, all girls, aged five, seven & ten.  The girls were happy, well-adjusted and good students in school.  They were all quite fond of their father.  There was no indication that they had been abused.

There was no physical evidence that supported the prosecutor’s case.  In fact some months after the allegation, the child was unable to explain what, if anything, had actually occurred with George.  However, a county social worker had interviewed the child and had prepared a report containing numerous statements.  The social worker would be the prosecutor’s star witness.  Notably, the social worker had testified in previous cases involving allegations of child sex abuse.  She had a reputation of being effective.

These cases are always difficult with severe consequences for any misstep on my part.  In preparation for trial, I confirmed her credentials.  What I found was a bombshell.

It was true that she had graduated from an accredited school with a master’s degree in social work.  But, she had never passed the examination through the Sate’s Association of Social Work Boards.  Simply put, she was unlicensed. She called herself a social worker, which under Maryland law constituted a misdemeanor crime punishable by up to 90 days in jail.  Only a licensed social worker can use the title.  The same rule applies to lawyers.  A law school degree does not impart the title – lawyer.

I filed a motion to strike her testimony.  The motion was granted and without their star witness the prosecutor ultimately dropped the case. For purposes of this discussion, I have simplified George’s case.  There were in fact many motions and issues presented throughout George’s defense.  Seneca would agree though that George’s case benefitted from luck.  By careful scrutiny of the prosecutor’s case, knowledge of relevant law, we were able to identify opportunity.

What Is The Windows Registry Editor?